A lot of people have worked lousy day jobs as they attempt to break into the movie business. For young Colin Clark, he hit the jackpot right out of college. He landed a position on the 1957 film, The Prince and the Showgirl, which starred Sir Laurence Olivier and Marilyn Monroe. Sure, he was only the third assistant director, which essentially made him a gopher, but he was involved on a picture with two of the biggest movie stars of all time. The Prince and the Showgirl wound up being a forgettable romantic comedy. It’s certainly not as fondly remembered as Olivier’s Shakespearean adaptations or Monroe’s Some Like It Hot or Gentlemen Prefer Blondes. The fascination with the film lies with the backstage drama, which was chronicled by Clark in his books, The Prince, the Showgirl and Me and My Week with Marilyn.

The British press was abuzz over the arrival of Marilyn Monroe (Michelle Williams) on her first trip to England. The blonde bombshell was set to star opposite Olivier (Kenneth Branagh) in his production of The Prince and the Showgirl. But, what should have been a breezy little romp became a turbulent shoot as Monroe frequently showed up late to the set, flubbed her lines, clashed with the temperamental Olivier, and relied heavily on booze and pills. It didn’t help that her recent marriage to playwright Arthur Miller (Dougray Scott) was already on the rocks. Monroe was also surrounded by an entourage that included publicist Arthur Jacobs (Toby Jones), business partner Milton H. Greene (Dominic Cooper), and acting coach Paula Strasberg (Zoe Wanamaker) whose advice constantly undermined Olivier’s directions. It was difficult to tell who really cared about her and who was just riding the money train.

Out of all this turmoil, Monroe found a friend in Colin Clark (Eddie Redmayne). She confided in him about her broken marriage and the pressures of living up to the larger than life persona of Marilyn Monroe.

My Week with Marilyn suffers the stigma of being based on true events or at least events that were purported to be true. Not to question the integrity of the real Colin Clark, but it is hard to swallow that a glorified production assistant would engage in a brief love affair with Marilyn Monroe. While the script by Adrian Hodges likely took its own liberties, the whole story comes off as pure fan fiction, no deeper than the forgotten Jason Priestley vehicle, Calendar Girl.

It also doesn’t help that the character of Colin Clark is the least interesting person in the film. As a result, the relationship between he and Monroe feels phony and forced, especially when there are so many more intriguing dynamics to explore. There was the stormy relationship between Monroe and Olivier, Monroe’s dependence on method acting and the Strasbergs, and Monroe’s unlikely union with Arthur Miller would have been better material for a feature. The brief scenes with Michelle Williams and Judi Dench as Dame Sybil Thorndike are a hint at what could have been an even better film.

Michelle Williams earned an Academy Award nomination for her portrayal as Marilyn Mornoe and she is the highlight of the film. Though Williams doesn’t share much of a resemblance to the famed actress, she does give a nuanced performance that goes beyond a mere impersonation. Kenneth Branagh also received a nomination for Best Supporting Actor for his turn as Olivier. Branagh has been compared to Olivier many times so it’s a treat to see him play the man on screen. Julia Ormond didn’t receive as many notices as her co-stars, but she gives one of the best performances in the film as Olivier’s wife, Vivien Leigh. A renowned actress in her own right, Leigh played the showgirl on stage, but was pushed aside due to her age. There just wasn’t enough of her or Harry Potter star Emma Watson as a wardrobe girl romanced by Clark.

Video/Audio: 8
The video is presented in 1080p with an aspect ratio of 2.35:1. The picture is stunning with bright and vivid colors, strong black levels, and natural skin tones. The details really shine through in the costumes and the beaming light coming from the projector in a darkened screening room.

The audio is presented in DTS-HD Master Audio 5.1. My Week with Marilyn is a dialogue driven drama so the sound isn’t overwhelming. There are strong sound effects coming from the whirring of a projector or the pop of a paparazzo’s flashbulb.

Extras: 3
The Blu-ray includes an audio commentary track with director Simon Curtis. The track is on the dry side as Curtis discusses how the project came together, on-set anecdotes, and his cast.

The Untold Story of an American Icon (19:07) is a featurette looking at the making of the film as well as the real-life events that inspired it.

The Blu-ray also comes with a DVD version of the film.

Film Value: 4
My Week with Marilyn doesn’t have anything new or unique to say about the mythos of Marilyn Monroe. Instead, its blatant Oscar grab meant to replicate the respectability and success of The King’s Speech. While Michelle Williams gives a strong performance, she alone isn’t enough to earn My Week with Marilyn a recommendation. 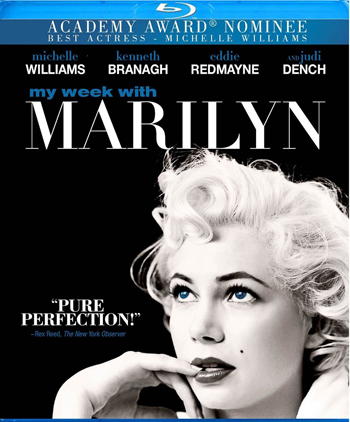