Get ready to jump start your ultimate horror binge just in time for Halloween! On October 15, 2019, SCREAM FACTORY is proud to present THE OMEN COLLECTION Deluxe Edition, featuring all four original films as well as the 2006 remake that kept movie audiences glued to the screen with white-knuckled terror. Packed with hours of chilling special features, this five-disc set includes 1976’s The Omen (new 4K remaster); Damien: Omen II, in which Damien discovers his destiny; The Final Conflict, in which he realizes his full power; and Omen IV: The Awakening, in which a demonic force returns in the form of a wicked young girl. The haunting legacy comes full circle with the riveting 2006 version. Including stirring performances from Gregory Peck, Lee Remick, William Holden, Lee Grant, Rossano Brazzi, Sam Neill, Mia Farrow, Liev Schreiber and more, The Omen Collection presents the height of sheer terror. Remember… you have been warned!

Pre-order for THE OMEN COLLECTION Deluxe Edition is available now. Avid fans and collectors please take note on special offer: order from ShoutFactory.com and get an exclusive 28.5″ X 16.5″ rolled lithograph featuring our brand new artwork, limited to the first 666 orders! 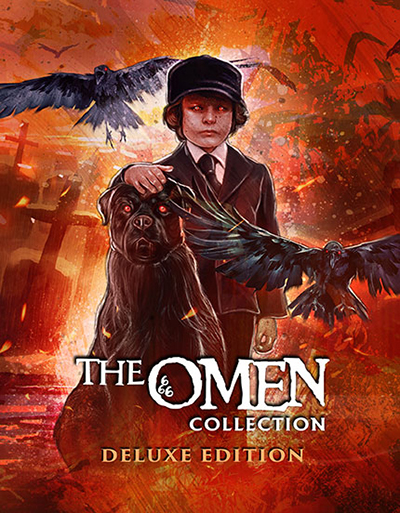 When Kathy Thorn (Lee Remick) gives birth to a stillborn baby, her husband Robert (Gregory Peck) shields her from the devastating truth and substitutes an orphaned infant for their own – unaware of the child’s satanic origins. The horror begins on Damien’s fifth birthday when his nanny stages a dramatic suicide. Soon after, a priest who tries to warn Damien’s father is killed in a freakish accident. As the death toll mounts, Robert realizes his son is the Antichrist and decides he must kill the boy to prevent him from fulfilling a cataclysmic prophecy. Briskly paced and breathtakingly evil, The Omen is the first film in the classic legacy of terror.

Since the sudden and suspicious death of his parents, 12-year-old Damien (Jonathan Scott-Taylor) has been in the charge of his wealthy uncle (William Holden) and aunt (Lee Grant) and a student of a military school. Widely feared to be the Antichrist, Damien relentlessly plots to seize control of his uncle’s business empire – and the world. Anyone attempting to unravel the secrets of Damien’s sinister past or fiendish future meets with a swift and cruel demise.

THE FINAL CONFLICT
Satan’s son is all grown up… and he’s not playing around anymore.

Damien Thorn (Sam Neill) is now 32, a coldly calculating being whose creed is evil, whose ambition is world domination and whose only loyalties are to himself and the father he serves. To attain his ends, he will kill anyone in his way, be it friend, enemy, disciple or lover. Only a dedicated priest (Rossano Brazzi), whose mission is to destroy the Antichrist and who has at his command the Seven Sacred Daggers of Megiddo, stands between Damien and his desire to bring the world to the brink of global chaos.

Damien Thorn is dead, but his prophecy is reborn in a mysterious girl named Delia, who is adopted by two attorneys, Gene and Karen York. When Karen realizes her baby was born under suspicious circumstances, she hires a private investigator to find Delia’s real parents. A series of bizarre accidents occur, and Karen begins to suspect everyone of conspiring against her as she unravels the truth about her child.

In this chilling remake of The Omen, man’s darkest fears are manifested as an unspeakable terror is unleashed on the world! U.S. diplomat Robert Thorn (Liev Schreiber, Ray Donavan) substitutes an orphan for his own stillborn baby in order to spare his unknowing wife, Katherine (Julia Stiles). But after a series of grotesque murders and dire warnings, the Thorns come to the horrifying realization that their child is the son of Satan!